According to an article published by Sherry Cooper from DLC , the Canadian jobs market continued to surprise on the high-side–on track for one of its best years on record. This provides further confirmation to the Bank of Canada that additional easing in monetary policy is not necessary. The economy added 53,700 jobs in September, well above expectation, taking the year-to-date jobs gain to just over 358,000, the most in the first nine months of a year since 2002. The economy added 70,000 full-time jobs in September, with part-time employment down 16,300. Canada has added almost 300,000 new full-time jobs this year.

In September, employment increased in Ontario and Nova Scotia, while it held steady in other provinces.
More people were working in health care and social assistance, as well as in accommodation and food services. At the same time, there were declines in information, culture and recreation, and natural resources.

The number of self-employed workers increased, as did the number of employees in the public sector. The number of private-sector employees was virtually unchanged, although it was up 2.3% year-over-year.

The outsized jobs gain reduced the unemployment rate to 5.5% from 5.7% in August, near its lowest level in the past forty years. One difference in the September report from recent trends is that most of the job gains reflected mostly lower unemployment levels rather than rising labour force participation. The number of unemployed Canadians fell by 46,900 in September, while the labour force increased by just 6,800. 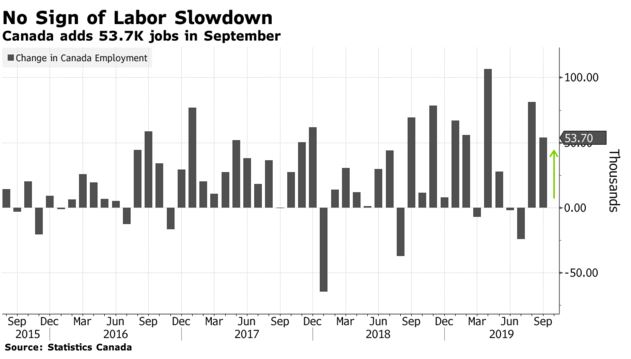 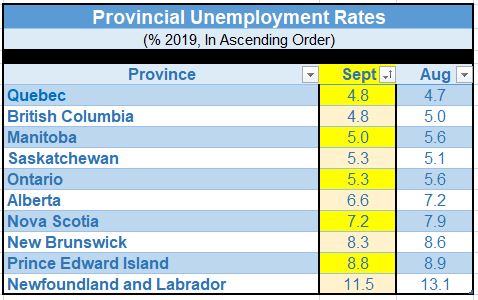 Another positive underpinning for the Canadian economy was the sustained rise in household incomes. The total hours worked last month were up 1.3% from a year earlier. Hourly pay rose 4.3% year-over-year in September, accelerating from a 3.7% pace in August. The last few months have posted the sharpest year-over-year increases in wage rates in a decade.

Bottom Line: This report lends ammo to the Bank of Canada to buck the tide of global monetary easing, at least for now. Few economists and investors believe, however, the country will be immune to a slowing global economy. Many expect the Bank of Canada will eventually be forced to cut interest rates. Swaps trading suggests one cut is still priced in over the next year.

The Bank of Canada’s next rate decision is October 30. There is so much geopolitical uncertainty in the world, emanating mostly from the US that no one can rule out a BoC rate cut sometime in the next year. The Canadian election results on October 21 will at least eliminate one uncertain issue, but a minority government were it to result, would only add to the uncertain stew. 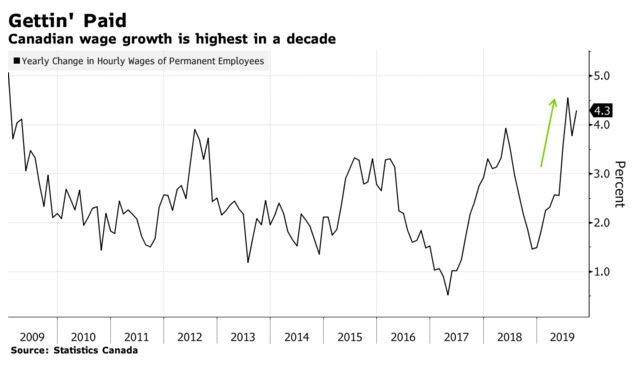 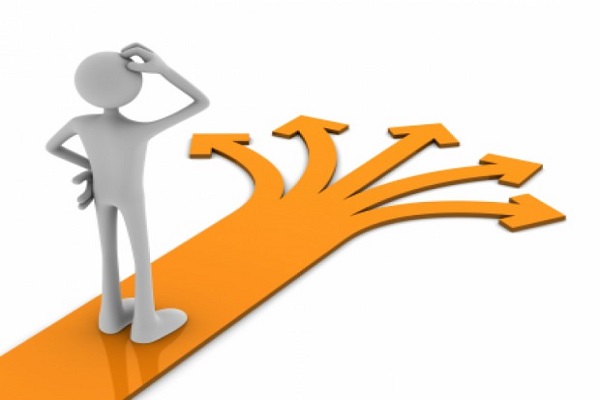 If you’re in a mortgage that’s coming up for renewal in the coming months and you’re considering just staying with your current lender, you wouldn’t be alone.

According to the Canadian Mortgage and Housing Corporation’s (CMHC) Residential Mortgage Industry Report released in the summer, in 2018, the number of mortgage renewals with the same lender increased by 16 per cent over the previous year.

The report suggested one of the factors that may have contributed to large increases in loan renewals with the same institution are the tighter approval criteria. In other words, people are worried they may not qualify for a new mortgage if they switch lenders, so they’re staying put.

You’ll remember in the fall of 2017, OSFI, (the Office of Superintendent of Financial Institutions) the agency that regulates the financial industry, announced tighter rules on mortgages. The biggest change related to uninsured mortgages, or homebuyers with 20 per cent or more for a down payment. These people are now required to go through a “stress test” or qualify using a minimum qualifying rate.

The changes came a year after a similar stress test was introduced for insured mortgages.

If the tighter mortgage rules still have you stressed as you face a mortgage renewal, the CMHC report noted the approval rate for same lender renewals remained stable at 99 per cent. Renewals are not specifically subject to the new stress test and are more likely to meet current lender criteria, the reported noted.

So, does that mean you should just automatically renew your mortgage with the same lender when your term is up? Not necessarily. You need to reach out to me to get the best advice.

For starters, most lenders, especially the big banks, will send you a renewal letter when there’s about three months left on the term. Sometimes that letter could come with six months left. Typically, the lender will offer you a rate at that time and all you’ll have to do is sign at the bottom line to roll over your mortgage.

But beware, lenders often offer a higher rate than a new client because they’re hoping the ease of renewal will keep you from seeking out a new lender and lower rate.

In some cases, it may be best to just sign and roll over your mortgage. There are a few things to consider. If you decide to change lenders, you’ll basically have to go through an approval process again. That entails getting all your documents, lawyer’s fees and appraisals.

You’ll have to ask yourself, is it worth the effort to save a few basis points off your rate, or a few hundred dollars over a term to make the switch?

For some it won’t be. But, if a switch can lead to saving thousands of dollars, it would certainly be something to consider. While everyone’s situation is different, the larger the mortgage, the bigger the savings will be if you can find a lower rate.

Often, homeowners will just use a bank their parents recommend for their first mortgage. But they might find themselves not happy with the service or terms of the mortgage and may just want to switch to a different lender as the mortgage comes up for renewal.

If that’s a situation you find yourself in, you have options, and I can help you make the best decision.